My son’s genius piano teacher is open to any way a student comes to music. For example, the Chopin piece my son practices daily was discovered on an Xbox video game.

I embraced this philosophy on a recent weekend trip with 3 teenagers
to Tuscany.


The Twilight vampire saga books by Stephanie Meyer and a recent James Bond
movie were the lure to extract reluctant kids away from video game
consoles and facebook updating and into the wintery Tuscan countryside to explore.

An easy two-hour drive from Rome, our first stop was the medieval city of Siena.  we headed straight to the expansive and unusual Piazza de Campo.

Note the nine distinct sections that make up the Piazza.  They symbolize Government of the Nine which oversaw a peaceful and expressive period in Siena from 1287-1355.

Next was a climb to the top of the  Torre del Mangia...all 412 steps...the only way to see the red Siena rooftops that Bond jumps between. Views over the Piazza and Duomo and the surrounding Tuscan hills are worth the
mighty effort. 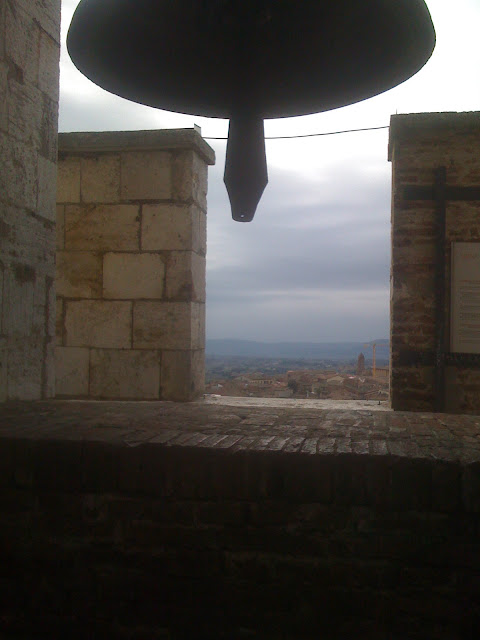 The Duomo is a heady mix of Gothic and Romanesque architecture with the typical striking wide black and white stripes. 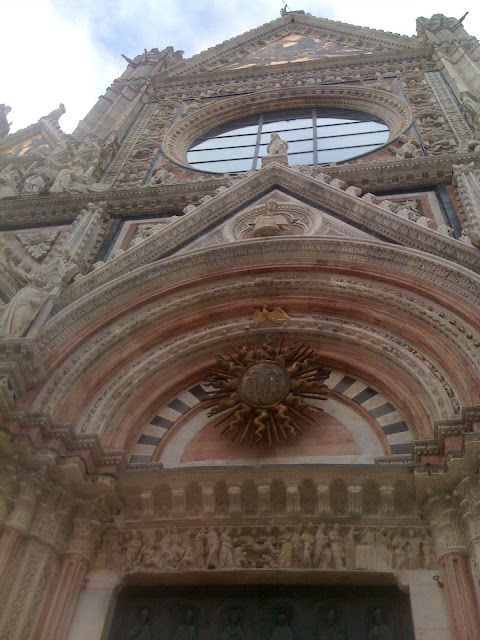 As we walked around town we noticed what we thought was the iconic Roman she-wolf statue with Romulus (the legendary founder of Rome) and Remus.  It turns out according to legend, Siena was founded by the son of Remus, Senius. Who knew? 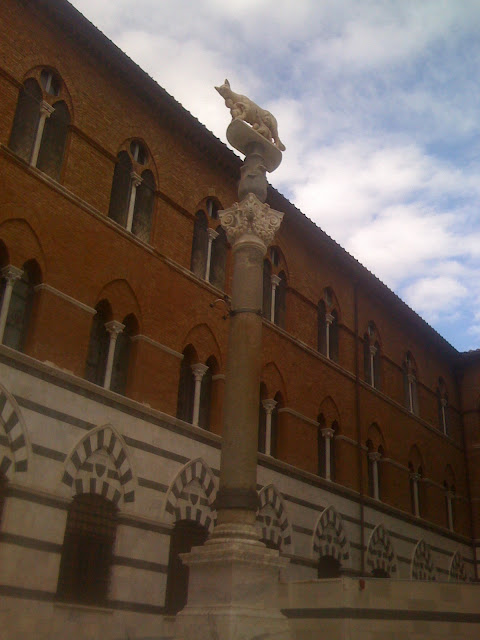 A hearty lunch was next at  La Taverna del Capitano,  I 3 Mori with walls covered with Palio history and triumph.  The spicy spaghetti diavola (with its witty price of €6.66) and the Parpadelle al Cinghiale,  washed down with the house wine made for a welcome recovery from the towers steep steps and the bitter wind outside.

Siena is known for its pastries and two standouts are the dense panforte (plain and chocolate varieties) dating back to the crusades and ricciarelli (sugar-dusted almond cookies.) Pasticceria Nannini is Siena’s oldest pasticceria and the place to have a cup of coffee and a slice of something sweet.

This agriturismo is close to Volterra, Siena and just outside San Gimignano in the tiny village of San Donato.  The owner Umberto Fenzi greeted us with a wine tasting of reds he produces from the wines in the nearby hills. Each one is named for the important women in life.  We settled into our very comfortable apartments and started fires right away. This was a perfect base to explore and relax. 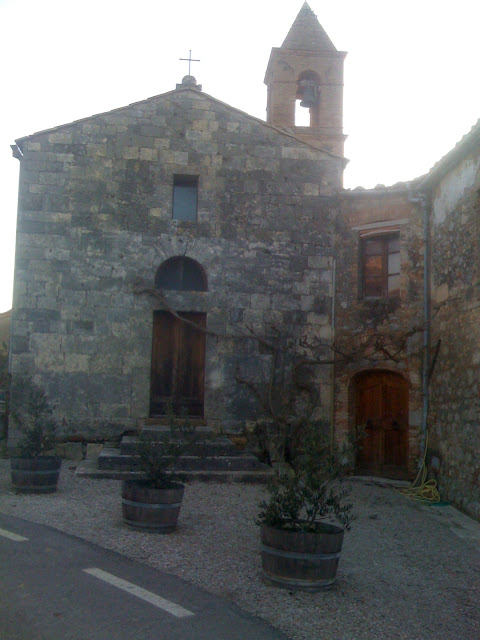 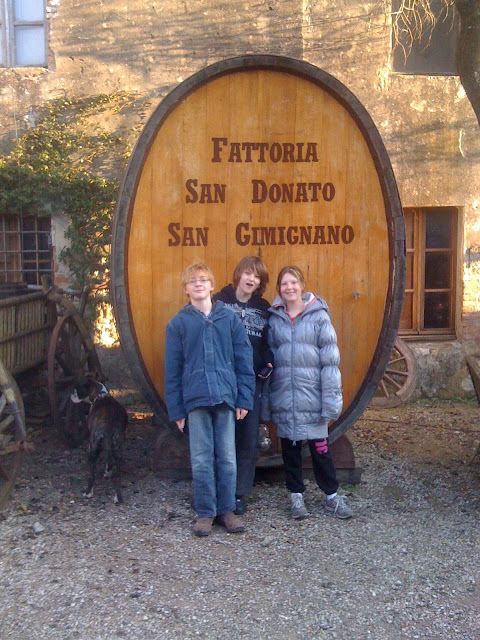 This is the Tuscan town where a million dreams of living in Italy are launched.  Filled with towers (13 of the original 70 still stand) and picture-perfect streets lined with pizza by the slice and gourmet salami and cheese shops make for a perfect fireside dinner back at the farm. 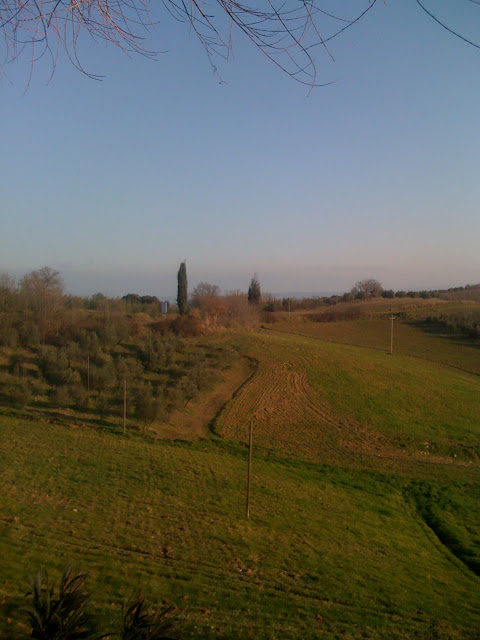 Note the 15th-century bulwark on the outside of the main gate (Porta S. Giovanni) that states the dates of Niccolo Machiavelli’s posting to San Gimignano. 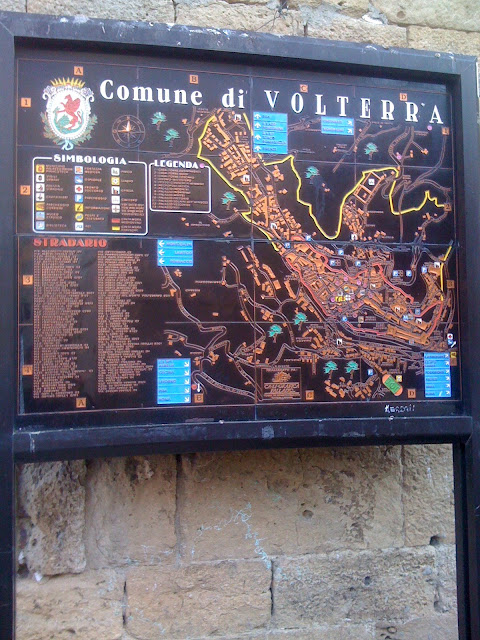 Once an important Etruscan center, the modern draw to this town is it’s featured place in book two of the Twilight series of books.  We went directly to the Saturday market crammed Piazza de Priori to recreate a pivotal scene in the second book, note some inconsistencies between the book and reality and check out the twilight inspired graffiti.

It was far to cold to be outside so the vote was to check out the Torture Museum. This ghoulish and gruesome this visit turned out to provoke some very
thoughtful conversations on society and tolerance and was well worth the enduring the ick factor.

We took a quick look at the Etruscan gate (Porto del’arco) and rushed back inside to web & wine a cozy, comfortable cafe that sits atop Etruscan ruins. You can sip super Tuscans by the glass and there is an extensive tea and hot chocolate menu.

There are spectacular vistas of the surrounding countryside along the "boardwalk" that run outside the city walls.

There are large parking garages at the entrance to the walled city. we parked in the parcheggio ovile.

Fattoria San Donato Umberto Fenzi speaks perfect English (learned from a school set up by an officer stationed at the nearby army base)
phone: 0577 941616/ 0577 942281
Apartments with down comforters, fireplaces AND heaters were €110 a night.

Machiavelli's treatise on power, The Prince was written in 1532.