A walk through the center of Rome 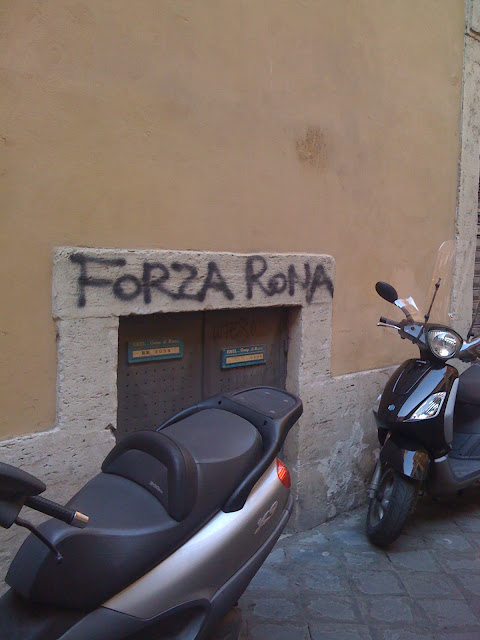 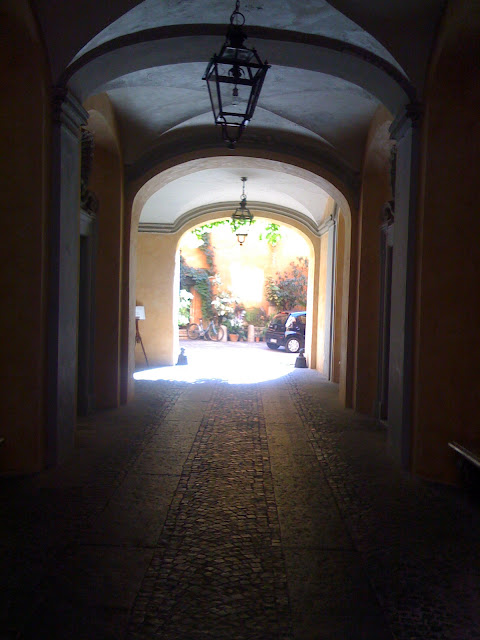 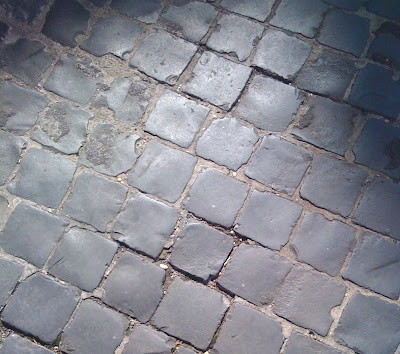 Meet at the historic Café St Eustachio and start our morning with a famous gran caffé, whose secret production technique is so closely guarded you can not see the barista at the machine. Piazza Sant Eustachio 82

… the piazza, tucked away between the Pantheon and the Piazza Navona, has other features to display. Overlooking it are 16th-century frescoes by Taddeo and Federico Zuccaro, recently restored, that depict the coats of arms of great Italian families -- the Medici, the Farnese -- and the conversion of St. Eustachio, the first-century soldier and martyr. It is said that he became a Christian when he saw a vision of a crucifix between the horns of a stag while he was out hunting. The church named for him on the square is said to be one of the oldest Christian sites in Rome. The bell tower, though, was built in 1196, making it typical of the Romanesque period, although its most recent major reconstruction dates to 1724. New York Times  - ALAN COWELL;  December 19, 1993

Piazza Sant Andrea della Valle
The ancient roman general, Agrippa once dammed up water here to create an artificial lake…Emperor Nero held a notorious and outlandish picnic here on a sumptuously decorated barge.  Look up at the rationalist building directly in front of the fountain at the lovely she-wolf mosaic
The first act of the opera Tosca by Puccini is set in the church facing the piazza, Sant'Andrea della Valle. The statue of an angel can be seen on the left side of the façade, while on the right side its twin is missing. Two angels had been commissioned to sculptor Giacomo Antonio Fancelli; but after the first one was set into place, it was bitterly criticised for its excessively long wing. The angry sculptor refused to complete the second statue, commenting that the pope could have made a better one by himself. So the right half of the façade was left without an angel. 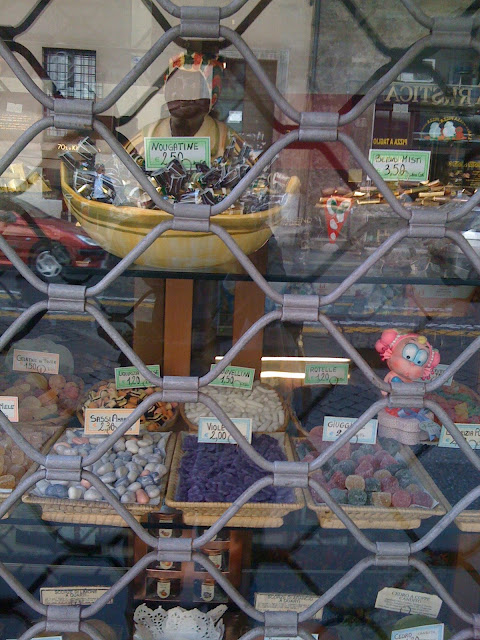 Courtyard of Palazzo Sapienza…all white Borromoni baroque swirling upward…you almost feel like you too are soaring…a stunning quick stop to feed the soul. 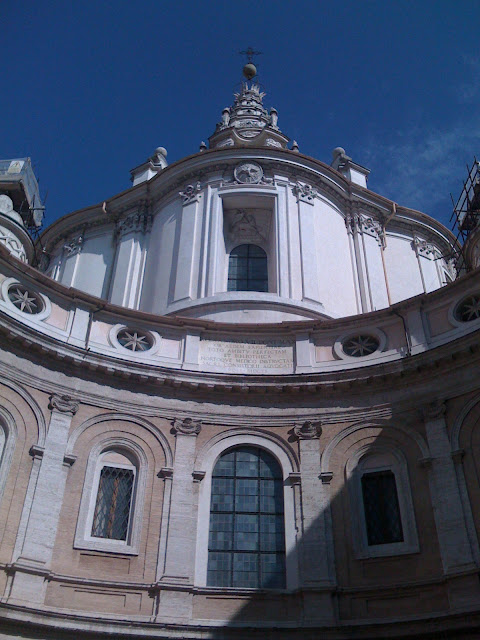 Officina Profumo-Farmaceutica de Santa Maria Novella the famous Florentine pharmacy established in the 1200’s opened to the public in the 1600’s, they once created perfume for Catherine de Medici…elegant and chic…a perfect gift is large decadent bar of pomegranate soap. Corso del rinascimento 47/49 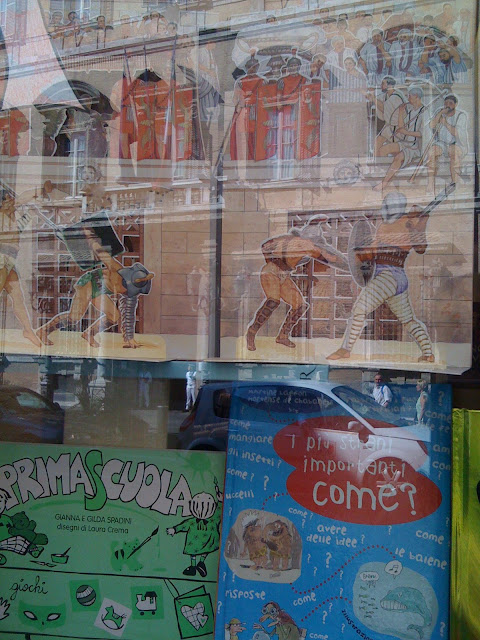 RosticceRi -   This just opened and has prepared foods (couscous salad, pasta, grilled vegetables) and fresh organic apple juice for a picnic lunch in the sun at the Piazza Navona.  Also sushi and crudo to go.  In addition, an unusual selection of gourmet jam and pasta sauces in the deli section. Run by the same family that runs Rosetta and Riccioli …two amazing places for seafood.

Ai Monasteri   another shop of jams, and soaps and wines and chocolates…even an elixir of life.  All made by Cistercian monks.  piazza delle cinque lune 76

Cita de sole bright and colorful toy store.  Wooden toys and sweet animals and dragons and dinosaurs.  Great place for Christmas stocking stuffers and easter basket treats for the under 12 crowd.  There is also a teensy nature company-like section with rocks and pendulums and gardening items.  Via della Scrofa 65

POPE PIUS VI IN THE 23RD YEAR OF HIS REIGN
RECLAIMED FROM THE DISLIKED UGLINESS
THE AREA IN FRONT OF M. AGRIPPA'S PANTHEON
OCCUPIED BY IGNOBLE TAVERNS
BY MEANS OF A MOST WISE DEMOLITION
AND ORDERED TO LEAVE THE VIEW FREE IN A OPEN PLACE

Baruffi - great selection of well priced boots and shoes.  Very friendly and very helpful, they speak English and can stretch the tops of your boots of they a too tight.  via degli orfani 88/89

Frederica Mendai – one of the best selections of paper/stationery I have seen…books for recipes, scrapbook, guests can be made to order.  Via dell Orso 39 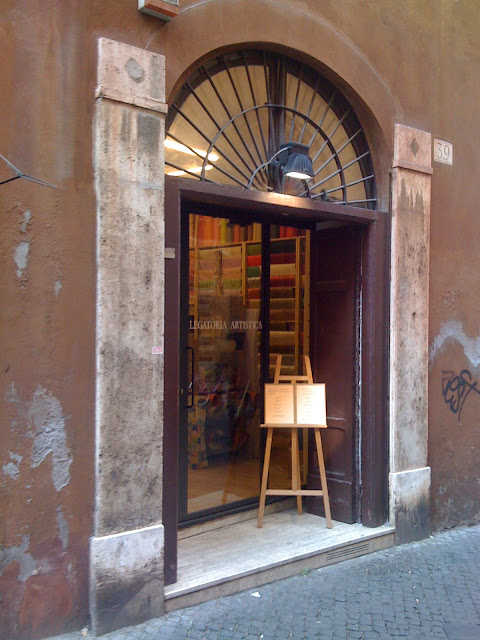 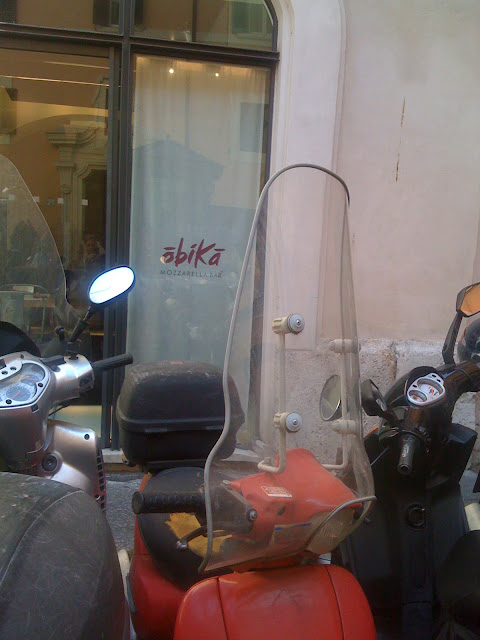 Enoteca al parlamento – kind of dark and dusty and the staff can be a little grumpy…but if you ever need an 800 bottle of wine…this is the place.  A small bar in the front has wines by the glass and small plates of snacks in the early evening.  Great selection of grappa and chocolate via dei prefetti 15

Palatium –  chic modern wine bar sponsored by the regional government of Lazio. All sleek glass and polished wood.  Has a nice selection of food items (olive oil, lentils, etc) and wine typical to the Lazio (of which Rome is the capitol) region. Via Frattina 94

Quetzalcoatl Chocolatier – Ida Petrrillo and her son turnout striped and polka dotted whimsies in flavors like lavender and chili.  Via delle carrozze 25

La Peonia Cose di Sardengna – if you can’t make it to the costa smerelda…stop in here and stock up on Sardinian treats like bitter Sardinian honey and bottarga to put on pasta.  Via delle carrozze 85

c.u.c.i.n.a – Williams Sonoma-like kitchen shop…there is always another gadget you need in the kitchen and this place certainly has it. Via Mario de Fiori 65

Vertecchi – party supplies, office/school supplies, calendars…if you are a paper junkie…this is the spot via della croce 70

Tad – the roman take on the concept store…fancy flower arrangements, hard to find perfume and cosmetics, shoes and house wares…there is also a restaurant in the back. via ripetta 155a

Barilla - always filled with an incredible selection of affordable, comfortable, chic shoes.  The staff is always nice and speak English.  via ripetta

Babette (lunch stop) a bargain buffet…€10 for soup and a plate of hot and cold salads, couscous, pasta etc…and water. Via margutta 1