Mini-Guide to Budapest Hungary {Where to Eat, Drink and Shop} 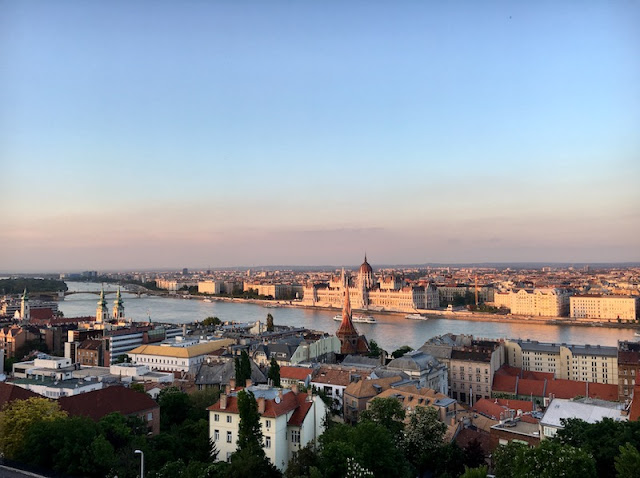 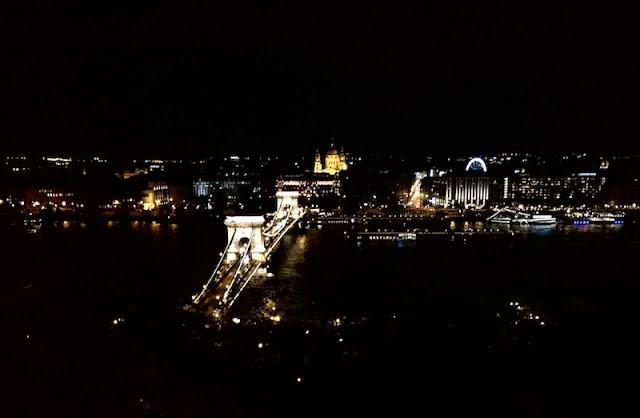 When I first married my husband on a beach in Benin, he had a job that required him to travel all over west Africa. A decade later he covered 28 countries in southern Africa. I rarely went with him on these trips mostly because they were work trips and partly because I had a little kid at home and partly because I wasn't all that interested in staying in a grim hotel room in Malawi while he was at meetings all day long.

When we moved to Rome his job changed, his travel docket came to an abrupt stop and he has been home for the last ten years. As is the case with most things you grow accustomed to, things change. All of a sudden he is traveling again for work. Instead of African capitals, though there are still a few of those on his to do list, he also gets asked to go to meetings in European capitals. Noah is away at school, my work is flexible and Mark is finally going to places where I am happy to tag along. A few weeks ago he had a couple of days of meetings in Budapest. For some reason this European city was not really on my radar. I guess that a lack of coastline had somehow struck it off the list in my mind. Let me be the one to tell you if it is not there already put Budapest on your radar. It is beautiful, easy, affordable and delicious. 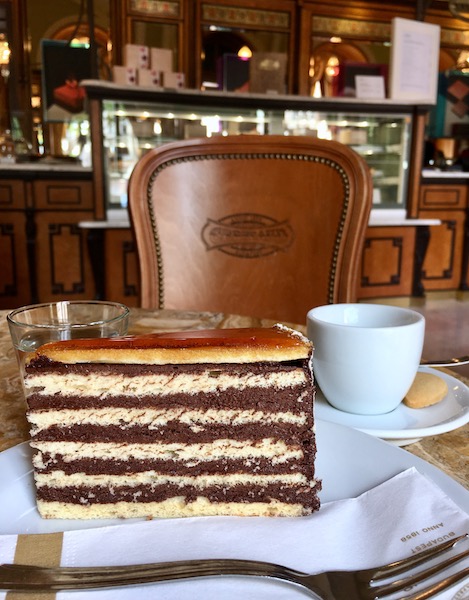 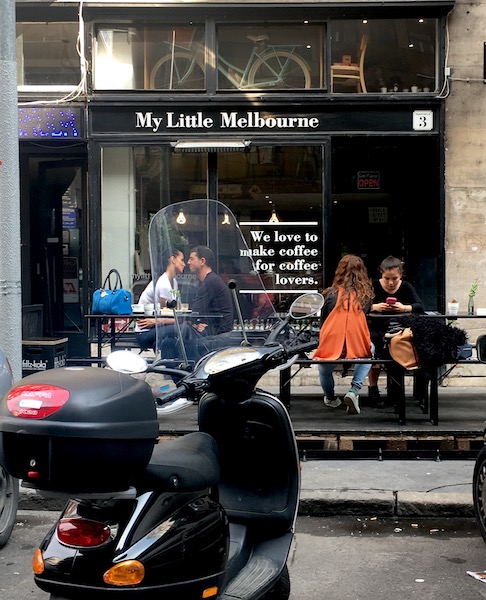 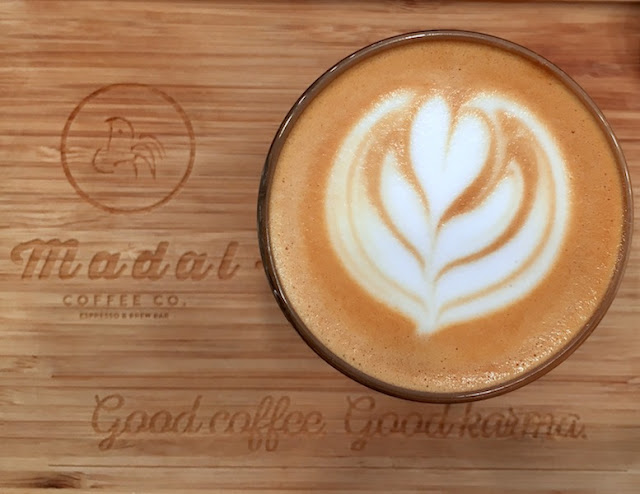 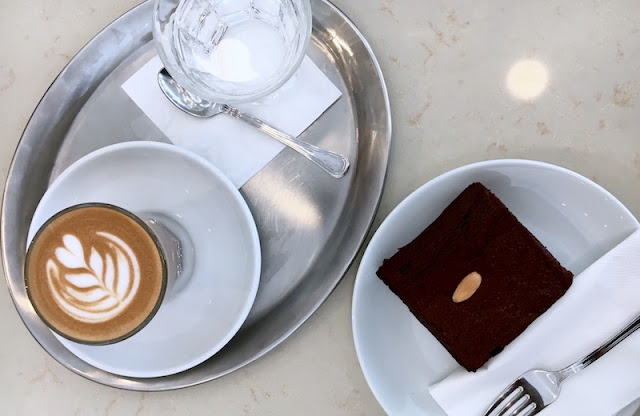 The coffee scene in Budapest is strong and serious. Yes I admit that I had a Starbucks (or two) but I also visited a few independent spots. After admiring so many pretty cortado's (an equal mix of espresso & milk) on my Instagram feed I finally got to try a few and now I am hooked.

My grandmother Ethel was a great baker. I always preferred her Texas sheet cake to just about anything else she made, but for her and my mother well, they loved Gerbaud squares, rich with apricot jam and walnuts. I somehow never made the connection that this famous cafe was their origin. I stuck to my chocolate loving tastes and ordered a slice of Dobos Torte with it's layers of chocolate between vanilla sponge cake with it's crackly caramel top. With a cup of coffee.

I haven't been to Australia yet, but I have visited a few Australian style coffee shops in New York and Amsterdam and I am getting a feeling for the vibe while I wait for my Antipodean adventure. I only had an Italian amount of time for for an afternoon macchiato but I can say this tiny shop pulls a great espresso and I would have loved to linger here.

Lots of blond wood, strong wifi and a shrine to a yoga master are what you find here. I had a very Instagrammable cortado and a not too sweet slice of lemon poppyseed cake.

With great lighting, gorgeous tiled floors and a soaring ceiling, the feeling here is very Scandi-chic. I ordered a Cortado and a brownie for a late morning snack. They have a shop with beans and teas and downstairs there is are very fancy coffee machines for sale. It was also a nice surprise to see coffee from my favorite Neapolitan bar, Mexico and the Florentine third wave coffee masters Ditta Artiginale. 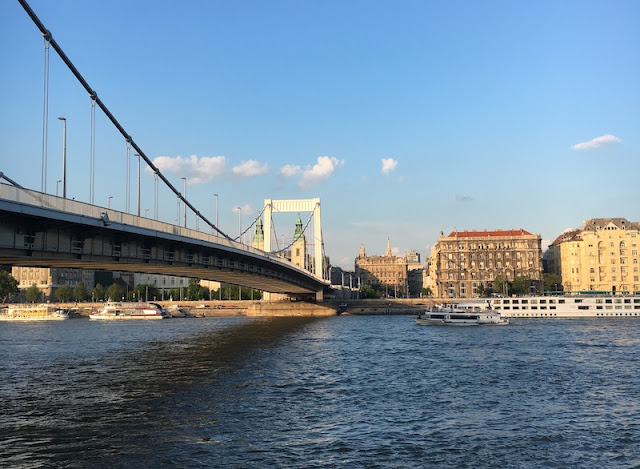 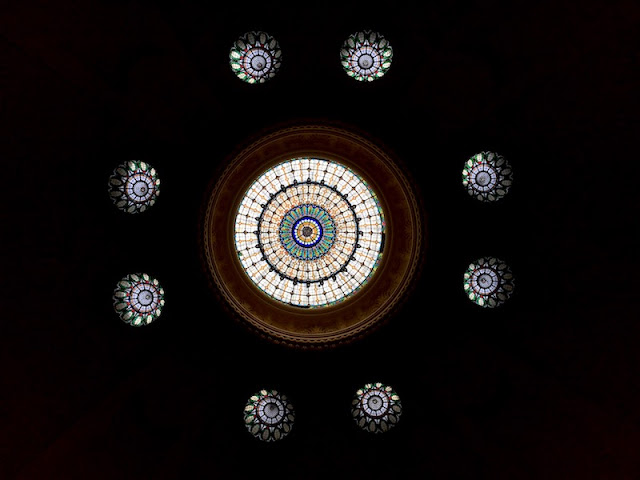 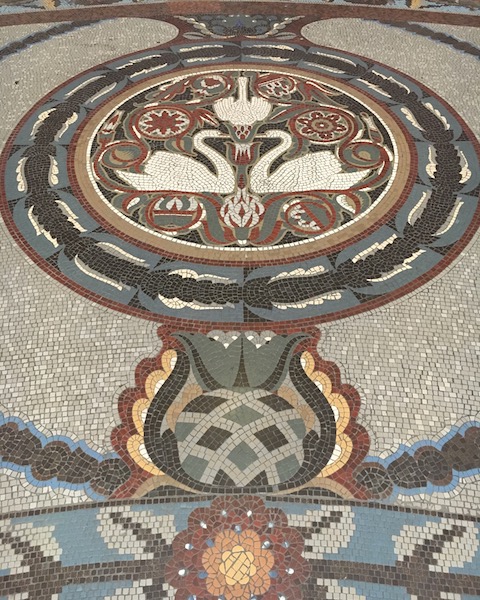 Pack you bikini (and flip flops)

A very stylish aunt of my college roommate gave us an indispensable piece of advice when we were young travelers setting out for our first independent European adventures. Always pack a bikini. This is important advice for Budapest which is famous for its healing thermal baths.

We only got to visit one of them because of a freak accident involving a low and very sharp edged parking barrier which sliced an artery in Mark's leg! (On a side note I can report the Hungarian emergency services are swift, efficient and compassionate. Oh and breathtakingly affordable.)

The Rudas baths are one of Budapest's oldest and the draw here is the small rooftop pool with views across the Danube towards Pest. 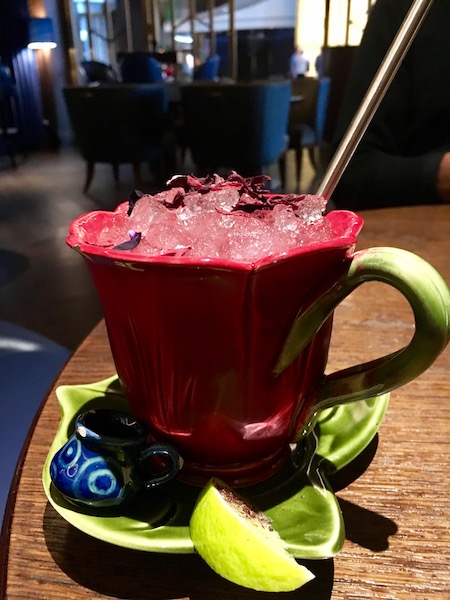 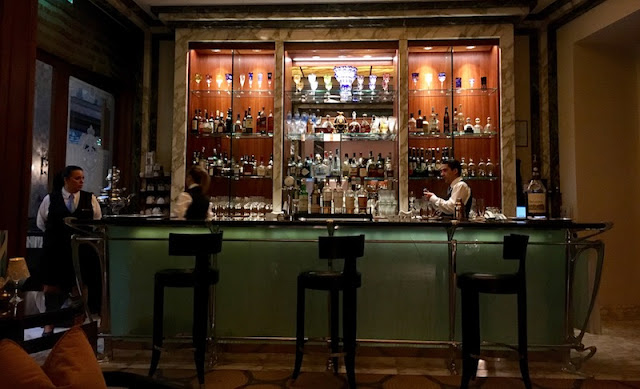 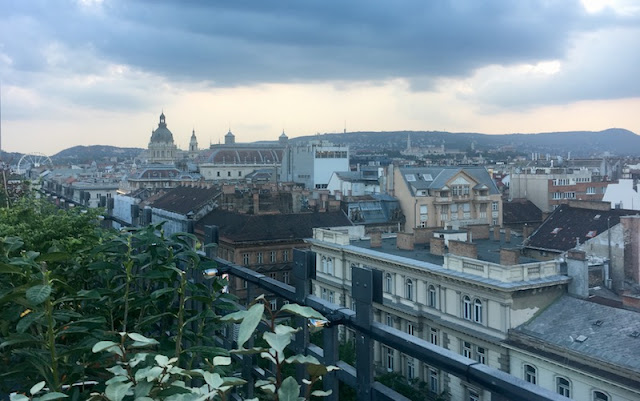 I Need a Drink

I had read somewhere that this was the swankiest cocktail bar in town and I knew my pal Richard loves a Kempinsky Hotel so we stopped here after about 15,000 steps of exploring. We had the entire place to ourselves. I loved the taste of my drink, a tangy mix of mezcal, hibiscus and sumac and the power outlet next to my velvet chair.

My pal Kevin is another one who really knows about the luxury lifestyle. (You have pre-ordered your copy of Rich People Problems, right?) He recommended having a drink under the glass ceiling of the Páva Udvar (Peacock Passage) at the Four Seasons. My old fashioned was tad too sweet for my taste, but the calm and lush setting made up for it.

This bar is a scene. The whole place was kind of ridiculous and we were the oldest people there by at least a decade, if not two. The views and the cocktails are great and if you are lucky you will end up sharing a table with the only other couple your age swapping stories about film sets and best secret european island spots. 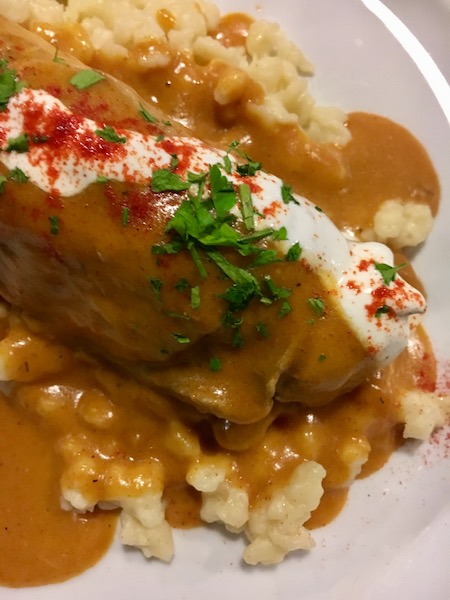 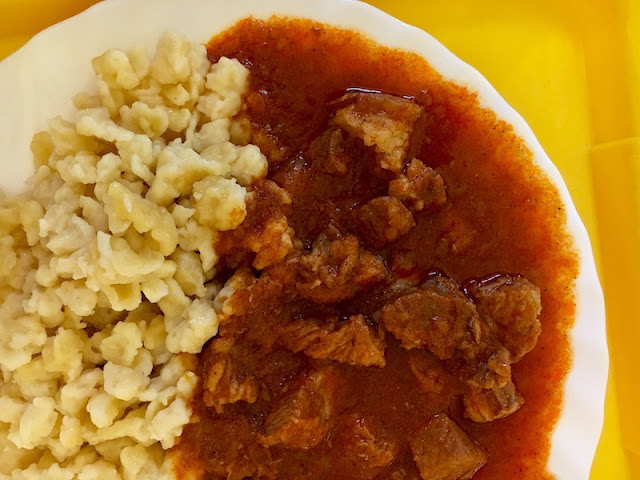 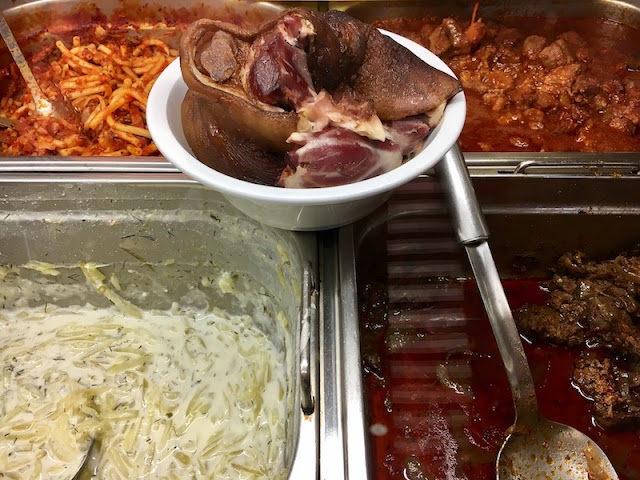 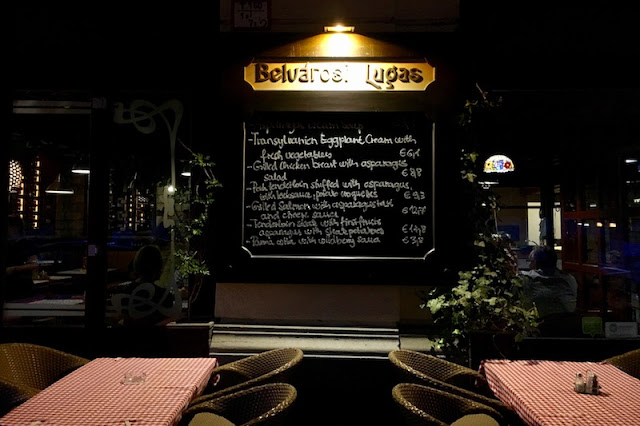 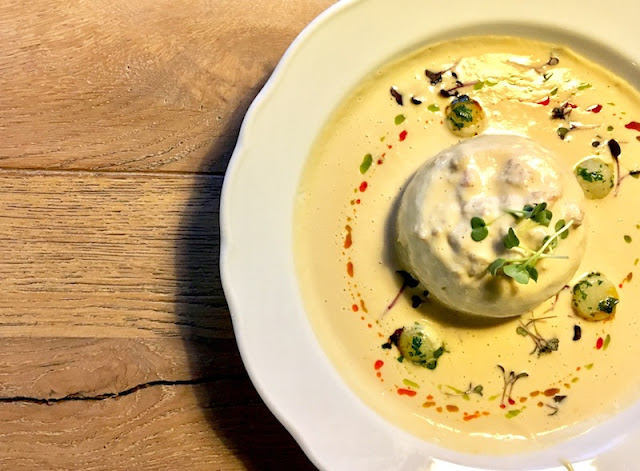 Where to Eat in Budapest

This was one of those trips where I didn't do that much research aside from reading my pal Ishta's blog posts because I had a bunch of writing to do and didn't know how much free time Mark would have and didn't want to be disappointed by knowing what we were missing. As far as food all I really knew about was paprika and Dobos torte. I had no idea that Hungary is the world's second largest producer of fois gras? How did I not know this? I made an attempt to eat a bowl of goulash and a slab of fois gras at least once a day and recommend you do the same.

This simple place across the street from Saint Stephens Basilica was exactly what I was looking for. Cheap and cheerful (and yes a little bit touristy.) The food was terrific. Mark had an asparagus soup that I have already tried to replicate here in Rome, full of fresh spring flavor. I had a plate of chicken paprikas that was almost as good as my mothers. Cold local beers were the perfect accompaniment.

We watched Anthony Bourdain's Budapest episode the night before we left and one detail really resonated with me. The Hungarian version of the tavole calde inside a butcher shop. I had lunch at Balla-Hús not far the main shopping street Vaci utca. I asked what the man behind the counter liked best and he pointed at a vat of stew and said pork meat. and soon had a flimsy plastic plate piled high with that and a side of nokedli (which are similar to German spaetzle.) My idea of heaven.

This restaurant at the end of the leafy Andrássy út has a big picture windows with views of a lake and a fairytale like castle. Mark's colleagues had organized a dinner here where the menu is Hungarian but a (somewhat) lighter, modern version. I started with a jar full of duck liver pate with a basket of fresh bread with a glass of sweet Tokaji wine. Their version of stuffed cabbage switched out the cabbage for kohlrabi and I did not leave a morsel of it on my plate. We stayed late until a fierce spring storm passed and learned about Palinka, the Hungarian version of grappa, which I can say is the perfect antidote to too much duck liver and creamy sauces. 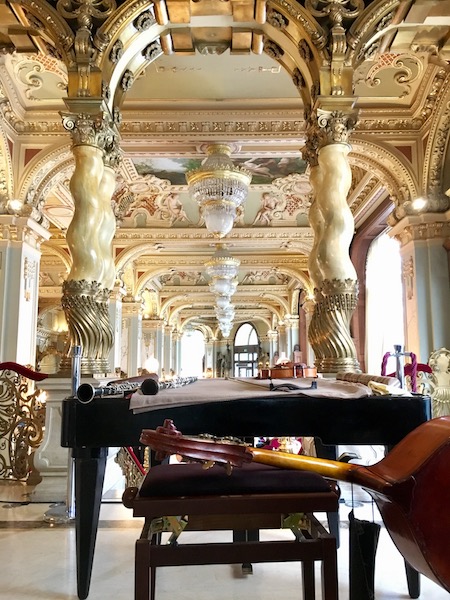 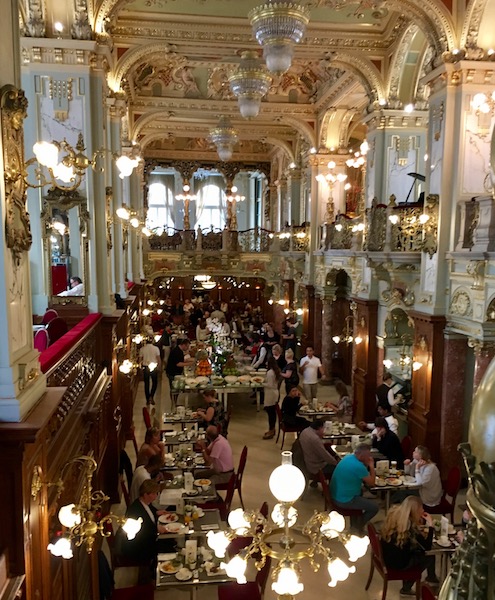 This might be the number one tourist destination in Budapest. We went for an early and very leisurely breakfast. This is a place to embrace excess. There is more gold, mirrors, painted ceiling, gypsy music and champagne than you could possible digest. But you should try.

We did eat more than goose liver and Goulash. Budapest has much more variety than Rome when it comes to ethnic food. 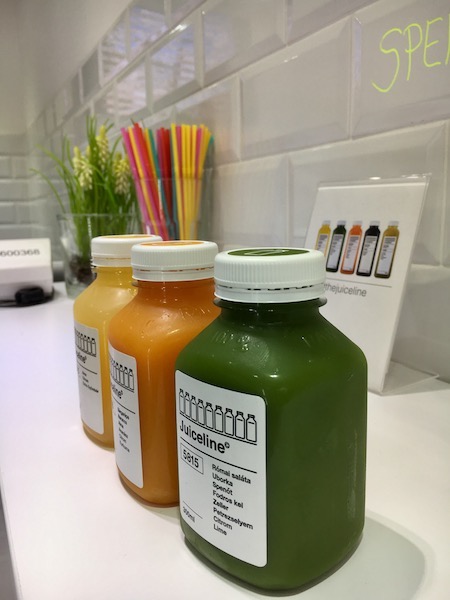 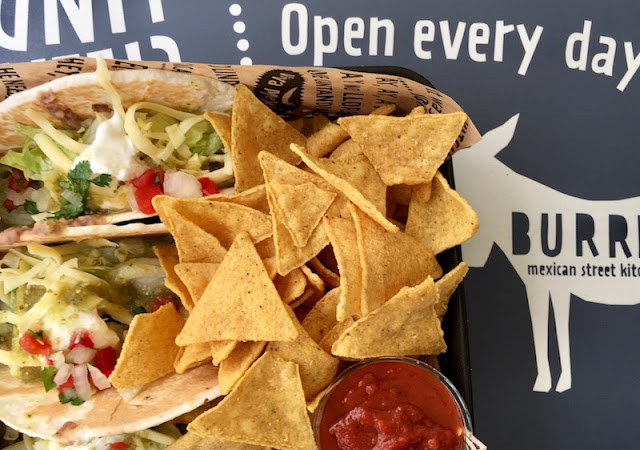 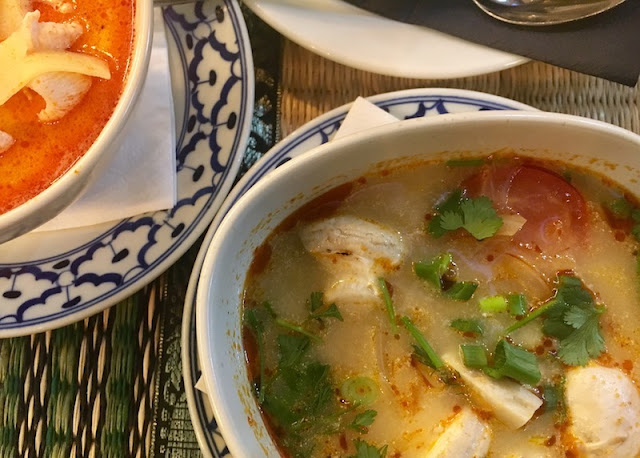 
There was no way my juice obsessed husband could go for more than a few days without a hit of kale and ginger. I found this jewel of a shop near the Central European University. He and the owner bonded on talk about machines and ingredients while I enjoyed a jolt of vitamins.

We visited this fast food riff on Chipotle on Cinco di Mayo. the beef tacos, chips and salsa and cold Modello beer were the perfect way to celebrate.

We definitely over ordered  in our excitement to have Thai food. My Tom Yum soup had just the right amount of heat and was generous with the shrimp. If we had stopped at the Kaeng Ped we would have been plenty full. But we had two more enormous plates to go. The Pad Thai was a little on the sweet side and Mark's beef Phat Med Ma - Muang Hi-ma-paan was well balanced and spicy. 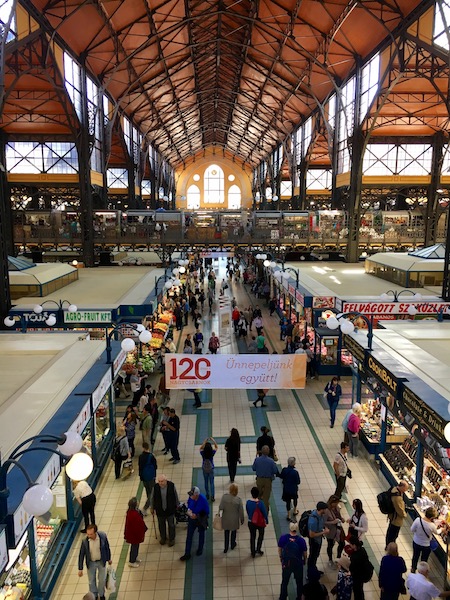 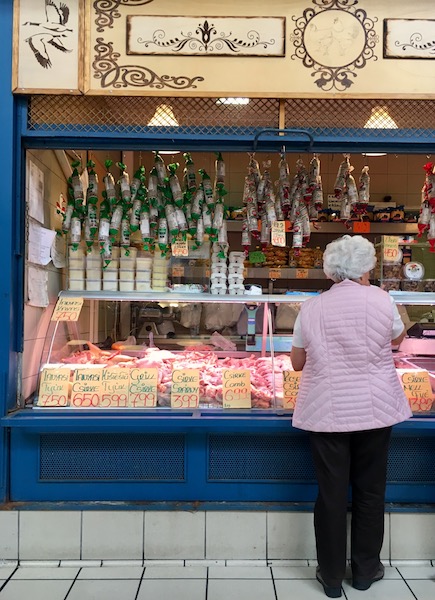 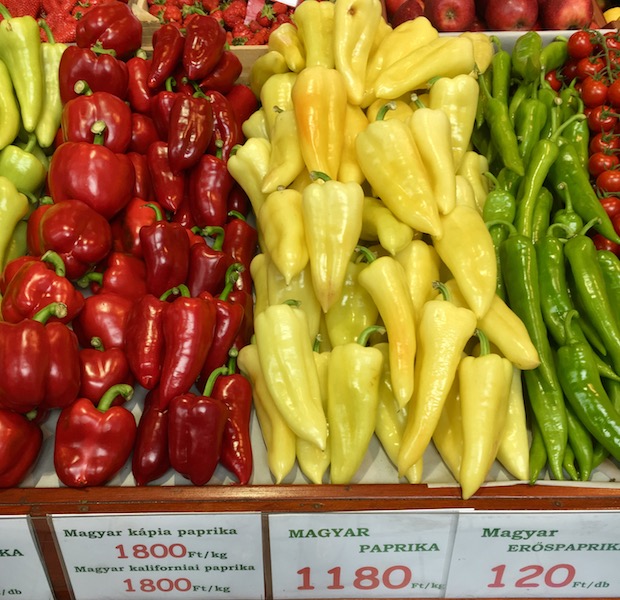 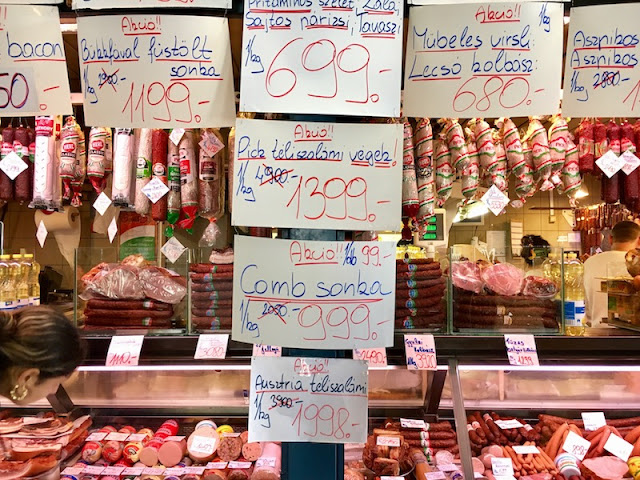 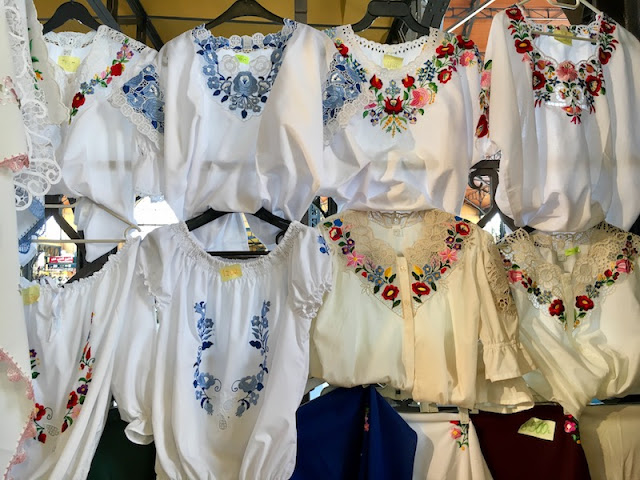 Where to Shop in Budapest

Since this was a work trip for Mark I had most of the day to wander around by myself and window shop. Which is pretty much my favorite thing to do.

I love to go to the grocery store in a new place. The Great Market Hall is an enormous turn of the century indoor market with stalls piled high with produce and paprika, glass cases with cuts of poultry I have never seen before and rows and rows of hanging sausages. Upstairs is full of tourist goods like embroidered tablecloths and cut felt cushions and a narrow row of food stalls. I got in line and ordered a Langos, a deep fried circle of bread topped with sour cream.


Here is Italy we don't have anything like a CVS drugstore where you can browse the aisles for shampoo and bandaids. There were outlets of this drugstore all over town and what could be a better gift for your girlfriends back home than sheet masks with the instructions in Hungarian?

I waited until the airport to buy a supply of Palinka and Unicum, the Hungarian bitter herbal liquor. 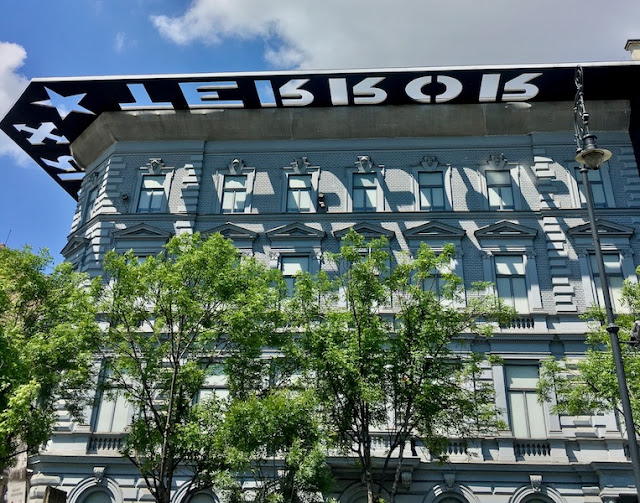 Hungary was firmly behind the iron curtain for a very long time and before that was under Nazi control. The Terror House is a monument to these dark days. I am a firm believer in not disappearing your terrible history  and this space, which is so striking both visually and sonically, makes it very very clear how terrible it really was.